Everything You Need to Know about the Lotus Evora

If you are a Lotus fanatic, you’ve probably been eagerly waiting for news about the Evora. Well, we’ve got some good news for you – the Evora will be making a comeback for the 2021 model year! The Lotus Evora has always been a popular choice among car enthusiasts due to its sleek design, impressive performance, and affordable price. The 2021 model is expected to take these features to a whole new level. Read below for everything you need to know about this impressive sports car.

The History of the Lotus Evora

Lotus is an auto manufacturer based in England that was founded by former racing driver and engineer Colin Chapman. The company focuses on lightweight cars with impeccable handling, which it achieves by using innovative engineering techniques.

The Lotus Evora is one of the company’s newer models, having been released in 2009. It was first developed as “Project Eagle”, which was launched in 2008 at the British International Motor Show. The car was designed as a 2+2, meaning it has room for two passengers in the front and two in the back. The Evora has seen several revisions since its release, with the latest being the 2021 model.

The car was based on the Lotus Elise. It was intended to provide more interior space to accommodate taller passengers (like former Lotus CEO Mike Kimberly). It was also built to have a more powerful engine. The car was very successful in the sports car world, winning multiple awards along with praise from critics and consumers alike.

The name “Evora” follows the tradition set by the company’s other two models, Elise and Espirit, in beginning the name with an “E”. The name’s derivatives are the words evolution, vogue, and aura. Other names that the company thought about were Eagle, Exige, and Ethos.

The Lotus Evora is equipped with a 6-cylinder, 3.5-liter, supercharged V6 engine that generates 375 horsepower. The car has a top speed of 162 miles per hour and can accelerate from 0 to 60 mph in 4.1 seconds (and even faster when you take into account the extra power for the 2021 model).

Currently, the Evora has a 2+2 seating configuration. It is the only 2+2 coupe other than the BMW i8. The front seats are very roomy and can accommodate people over 6 feet tall. However, the back seat only provides enough leg and headroom for children and smaller adults. The car’s cabin is fitted with leather upholstery, an infotainment system, and climate control.

The Lotus Evora is a very versatile sports car. It can be driven on the track or on the street, making it perfect for weekend driving or racing events and track days. The car is also fitted with a sophisticated traction control system that helps keep the vehicle under control during high-speed maneuvers.

The Evora is also one of the lightest cars in its class, weighing in at just 3,175 pounds. It’s this lightweight construction that allows the car to handle so well on the track.

The Lotus Evora has featured a few different models over the years:

This model was released in 2014 as a replacement for the Evora S and featured a new engine that generated 400 hp. It also had a revised suspension, a new six-speed manual transmission, and an improved interior. Its improved engine output was made possible by the addition of a supercharger to the V6 engine. The car was able to accelerate from 0-60 mph in 4.1 seconds and had a top speed of 186 mph.

The Sport 410 was first unveiled at the 2016 Geneva Sport Motorshow as a slightly upgraded version of the Sport 400. Its Toyota-derived V6 engine produced 410 hp and could accelerate from 0-60 mph in 3.9 seconds. It also had a top speed of 190 mph.

The Evora GT430 was unveiled at the 2017 Geneva Sport Motorshow as the most powerful Lotus road car to date. It featured a new supercharged V6 engine that generated 430 hp and could accelerate from 0-60 mph in 3.7 seconds (0.5 faster than the Sport 410). The car had a top speed of 190 mph and was regarded as the most powerful road-going Lotus yet.

The key difference in the sport version of the GT430 is the aerodynamic improvements. The car has an improved front bumper, carbon fiber door sill covers, a fixed rear wing, and a fixed front dive plane that all contribute to increased downforce. The top speed was unchanged but the 0-60 mph time became faster at 3.6 seconds (0.4 better than the GT430).

The 2021 Evora is a more significant upgrade in relation to its production cycle. Whereas the Evora 400 was only an updated version of the Evora S, this year’s model is a ground-up redesign.

As for looks, one can say that the design has been toned down from previous models. For instance, the front grille features a more defined look and houses LED headlamps. The rear end has also been altered to include a larger diffuser and a new bumper with a central air outlet. The car’s body lines have been smoothened out as well.

The back seat is now wider and taller, allowing for three people to sit relatively comfortably in the car. There is also slightly more luggage capacity, with the Evora now able to accommodate a golf bag or two cabin bags.

The chassis has been completely redesigned, featuring an aluminum front subframe and a composite rear tub. The car also has revised suspension geometry, Öhlins dampers, and Eibach springs.

The biggest change, however, is the addition of an electronic differential. This allows the car to make use of all its power by adjusting torque distribution between the rear wheels. It also improves traction and stability when cornering.

Interested in taking a look at the Lotus Evora and our other extensive Lotus inventory? At Cars Dawydiak, we pride ourselves on selling the best cars in the industry. If you want to look online for a great selection of Lotus Evoras and other beautiful models at affordable prices, click here. 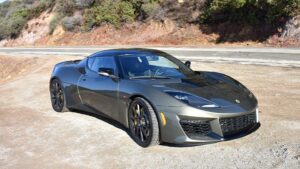 If you’re a Lotus driver living in the Bay Area, then you need to head over to our San Francisco dealership! We are the best

The Bay Area is one of the most beautiful places in the world. If you’re looking for a scenic drive, you’ll be spoiled for choice.

Looking for a high-quality pre-owned Volvo car in the Bay Area? You’ve come to the right place. Our San Francisco dealership has an extensive inventory